How the City of Hastings Transitioned to ArcGIS Utility Network Despite COVID-19 Restrictions, Limited Resources, & More 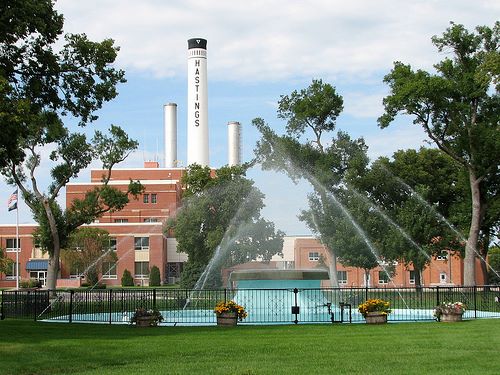 When Esri announced that its Geometric Network would no longer be supported in 2026, many organizations found themselves scrambling to switch to something new—including the City of Hastings.

The City had been debating whether to move to another software to meet their needs as they evolved over time. They chose ArcGIS Utility Network (UN) because it could model their real-world assets more closely and provide additional functionality that Geometric Network lacked.

However, the idea of a full migration was daunting, particularly considering how dependent they were on the Geometric Network for day-to-day operations.

The City reached out to [Axim Geospatial] for help migrating to Utility Network and making the most out of its new functionality. Our team focused on teaching rather than doing, which fit the City’s goal of learning how to migrate future utilities rather than being dependent on a partner to do it for them.

Because a full migration can be overwhelming, we started by integrating the Utility Network for Hastings Water Utilities. Working together, we were able to migrate all the City’s crucial data into the UN.

However, we ran into some challenges along the way that threatened the timeline and took some ingenuity to overcome...

The first challenge we faced together was the pandemic. For a project like this one, our team prefers to work onsite. Unfortunately, COVID-19 made that impossible. We were forced to do a combination of remote and on-site work, which was an adjustment for both of us.

However, our remote partnership ended up working out for the better. The migration, implementation, and training combined was quicker and smoother with 5 full days on-site and the remaining time remote. It also allowed for more time to learn their needs, address problems as they arose, and accomplish more during the timeframe.

The second biggest challenge happened with the software itself. Even the most advanced tech can have some snags. Our team and the City identified a few software bugs during the migration. We as an organization felt it was important to bring these to Esri’s attention, even though it was out of scope.

It was a 2-3 month process to work through bugs with Esri Water Team. But with [Axim]’s relationship with Esri, we were able to push the importance of the issues and ensure other organizations wouldn’t run into the same problems.

Learning new software is often a frustrating experience. To ensure the City had the longstanding institutional knowledge needed to maximize its UN investment, our team provided in-depth knowledge transfer.

The City of Hastings was dedicated to doing the knowledge transfer process right. Working with Lindsey Stone at the City took the stress and pressure off of our technical team, which made the job easy from our end. This allowed the City’s team to be self-sufficient and understand the workflow well enough to implement it themselves, without any help. The training also set the stage for additional utilities to be migrated in the future.

"Our successful migration to the Utility Network has been in large part due to the workshare relationship with [Axim]. Our team has been able to learn and transition more easily by working side by side with expert partners. In addition to helping migrate our data, [Axim] has helped us implement new tools and processes, which have improved efficiencies for our department and other users."

Despite the challenges both of our teams faced during the migration, our partnership allowed the City of Hastings to fully migrate its Water Utilities over to Utility Network. And City employees have noticed a difference immediately:

The City is now at the forefront of technology and continues to push the limits of UN capabilities. Their team has completed the migration of Sewer and is currently migrating the Electric and Gas departments to the UN. Because they are well educated in the complete migration process, they are fully confident in their ability to tackle these projects on their own.

They have also purchased an additional support block from [Axim] for technical help when needed with further utility migration of domains.

If your city is ready to transition to ArcGIS Utility Network, [Axim] is available to help out every step of the way. Schedule a meeting now to get started.